Last year, while writing Gideon, book 3 of the Mystic Zodiac series, I came up with a world that I absolutely fell in love with and came up with two new series/spin-offs. I immediately wanted to shift gears and concentrate on the Keystone Predators (the 1st spin-off) but I made a personal commitment to write the Mystic series. When the opportunity to write a story for the Romancing the Wolf box set came about, I decided to give into the urge and write the spin-off. The box set is no longer on sale and I’ve decided its time to put my story out on its own. 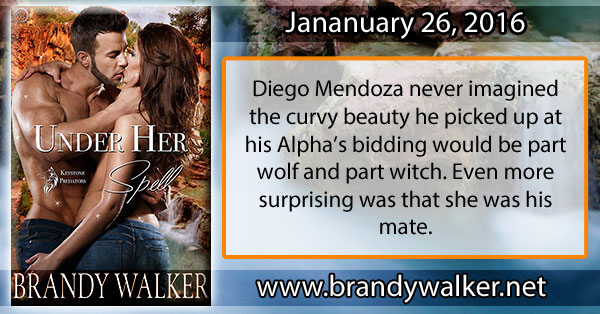 The Beta of the Keystone Predators, Diego Mendoza loves his new job and the

responsibility that comes with it. Even the simple task of retrieving his Alpha’s cousin from the airport. He thinks its going to be a quick grab and go until he gets her in his truck.

Daphne Moore needs a break and a trip to Arizona for her cousin’s wedding seems like the perfect place. Part wolf shifter and part witch she’s had a hell of a time fitting in. Her father’s Pack wants her to renounce her mother’s coven, while her mother’s coven wants her to swear an oath of allegiance forsaking the Pack. All Daphne wants is a place where she’s accepted as both wolf and witch.

Diego wants his mate instantly and is ready to do whatever it takes to claim her. Daphne is a little more wary of the situation. Her wolf is telling her to go for it while her witchy side balks, knowing Diego will try to suppress her more enchanted side.

Can Diego convince his witchy wolf he is completely under her spell, hexing side and all?

WIP Wednesday: Under Her Spell

The Ardennes Curse – Romancing the Wolf