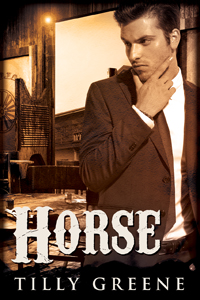 A Secret Something about Horse:
What isn’t said in this story but implied is how much Horse desires a fresh start and here are the details why. The time he spent in NYC was not good for his soul. Upon his arrival, he joined a gang led by a fellow Irishman, and was the muscle when things went bad. He leaned to play poker in his spare time of which there was loads. He learned to use his muscles, fight brutally, and would always win. He was paid a small stipend and extra when he had to get tough. At first he found his new existence exciting and what he was looking forward to living, only the excitement soon wore off. The money was just enough for him to live on, but there was none left over to send any home to help. One day he woke up and decided enough was enough, he wanted out. Without speaking to anyone, he packed up a bag and left. Leaving the big bad city was the best thing he could ever have done, only he wouldn’t realize this until after he landed in Cowler.

BLURB:
While living in Ireland farming peat, Jack Murphy knew there was no way he’d follow the time honored tradition for second sons to dedicate themselves to the church. He liked women too much, so with the blessing of his parents, he left for a new life in America. New York City held his attention for a couple years but he grew tired of the violent side of life he took on and boarded a train south and west to Cowler Texas. His first night in town he finds himself sitting at a poker table with the saloon in the pot. No way did he think he’d win, but if he did, well, it was worth a chance.

After gaining the name Horse, two gun fights and a sexy woman wearing spectacles collide, he finds the life he always wanted.