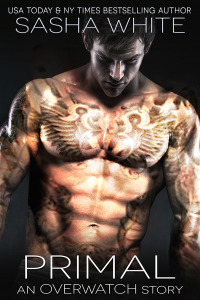 BEFORE YOU DIVE IN:
PRIMAL, is the second story in my new Overwatch series.

This series is the first time I’ve gone into writing something with the knowledge that I was building a series, so it’s been a whole new ride for me.   While UNFETTERED was the first story of the series it was more of a short 15k  intro sort of thing. (And it’s free everywhere right now. (see more and read and excerpt HERE. )  PRIMAL is our first step going deeper into the Overwatch world.
While the characters will have Overwatch in common, the stories are not all “In the club” if that makes sense? So, you’ll see the club, and get to know the members, and take a walk in their lives. And hopefully you’ll want more of them, because I plan to have more of each character in every following story. As I get deeper into the club, the stories get longer. LOL  The joys of learning to write a series.
So I’d like to invite you to come on this ride with me. I think it’s going to be a helluva a good time!!
One thing to note is that you can pre-order for only 99 cents at  iBooks * Barnes and Noble * Amazon.com * Amazon.ca  (release date is set for October 24)

BLURB:
BDSM club owner Adam Kessler is no one’s hero. He joined the army to get away from the gang-life that had taken his brother, only to come home to heartache. He doesn’t hide his dominant side, and he doesn’t hesitate in his need to protect or enforce his particular brand of retribution on those who’ve earned it. There’s no way in hell he could walk past a man hassling a woman in an empty parking lot and do nothing. Only when the confrontation is over and the voluptuous blonde turns eyes filled with desire to him, does Adam realize he’s in trouble.

Psychologist Olivia Hamilton grew up with the proverbial silver spoon, and has never regretted spending more time on her career than on romance, until she meets Adam Kessler. He’s dark, he’s dangerous, he’s deliciously dirty…and she wants him.
Passion burns quick and hot between them and soon they’re caught up in an intensely carnal relationship that neither can deny. But when Olivia’s life is threatened and she learns just how dangerous he can be, will it be too much for the civilized psychologist to handle, or will she truly accept the man and win her hero’s heart?

BEFORE YOU DIVE IN:
Unfettered
Overwatch Series, Book 1

You never forget your first loveMechanic Ronnie Lang is tired of being “one of the guys”. Chasing the fantasy of finding a dominant male to help her explore her sexuality she applies to Overwatch, a private Kink club where her eyes are opened to a world that’s more than she ever imagined, and the man she’s never forgotten.