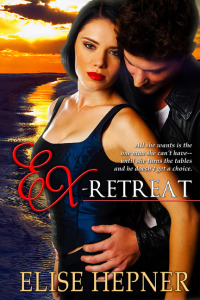 Elise Hepner lives with two spastic cats and a very supportive, slightly crazy husband. There is never a dull moment in the house, unless the caffeine runs out, which it never does. She’s a multi-published erotica author with Cleis Press, Ellora’s Cave, Xcite, and Secret Cravings Publishing.

She’s driven by her tea addiction and a tiny stuffed turtle her husband picked up from Disney World that sits on her desk and “supervises” her work.

When not writing (which is rare), she’s watching countless hours of reality television, playing the Sims or shopping online. Plus there’s that odd obsession with the color purple. Everything is purple. Visit Elise at her website www.elisehepner.com to keep up with her naughty ramblings, random tidbits and future work.

She has a newsletter where you can sign up for sneak peeks, contests, giveaways, new release news and other fun things:?http://eepurl.com/pW8Sj

After Chloe Barrons? fianc? cheats on her via webcam, she begrudgingly accepts her Type-A mother?s offer of a spur of the moment luxury spa weekend. But things don?t play out quite from point A to point B when she arrives drunk and disoriented on the front porch of a deserted North Carolina beach house. From the very start she?s caught off guard by Noah Knightly, a sinfully sexy, self-proclaimed commitment-phobe who?s a handyman for his sister?s relationship rehabilitation center?a rehab where Chloe is the sole guest during off-season.

But faced with temptation, to stay guarded she?ll have to call the shots.

Noah shouldn?t have taken Chloe?s reservation. But in need of a second pair of hands to fix up the beach house, he throws all his sister?s rules out the window. Soon he worries that maybe he?s bitten off more than he can chew: each day Chloe cracks more of his cocky fa?ade bringing down his guards to reveal a stuttering geek who has a hidden will to please her in any way possible.

With no way to ignore her pain, Noah sets himself up as a guniea pig to prove to Chloe that not all men are created equal?in or out of the bedroom. As Chloe comes into her own through every sexual session, Noah needs to decide if he?s man enough to accept the one thing he never thought he wanted?love.

?Hello? Mothership to Chloe? You there or is there a break in transmission? Because I don?t have any experience in bringing back patients from a catatonia. That?s Phil?s job and he?s not coming back until the fall.?

?I was asking which you?d rather start with, the pipe work, or weatherproofing the three decks out back.?

?Thought that would be your pick. Stand up, please.?

She shrugged and did what he asked, but didn?t move an inch from the chair.

?Hey, so, thanks for taking care of me last night. You didn?t have to do that and I appreciate it.?

His one word answer exuded gentleness. Maybe it was the soft-spoken respect behind it, like he wouldn?t have dared do anything else. Two large steps and he was in front of her, so close she sharply inhaled and her fists clenched tight behind her back. She actively avoided looking at him. Too close for comfort. Her focus scattered as she tried to ignore him, looking everywhere in the room. Tension threaded and wound tight through every muscle and she wanted more than anything to step away from him?but she sure as shit didn?t want Noah to know exactly how vulnerable one little movement had made her.

?It really wasn?t a problem.?

?Mmmhm,? she replied, weighing her options, trying not to look weak in the face of so much male muscle.

His hand cradled her chin and she jerked back, almost tripping before his arms cinched around her waist anchoring her against his firm chest. With a yelp she planted her hands on his shoulders, unable to do anything else. She scrambled to stay upright, their gazes locked.

Why hadn?t he let her go the minute he sensed she?d gained her balance? She fumbled for words. But there was nothing as his thumb slid along her lower back in small, smooth strokes as if he were trying to calm her down. But it only served to set her whole body on fire while time stood still and she weighed the merits of pulling away. Whether he would let her go at all.

A smile barely brushed his lips. His hands tightened on her waist, fingers twisting in her cardigan. Without too much thought, her fingers mirrored his tension resting on his shoulders. Beneath her palms he was warmer than she thought possible. He must have been burning up in his sweater. Which begged the question?what would he look like without it?

?That could ha-ha-ha-have been bad,? he stuttered and she watched his Adam?s apple work as he swallowed hard.

That was all that came out of her mouth. She processed his cocky swagger crumble to an endearing affect that made her pulse slide into overdrive. His face lit up, beet red, as he blinked behind his glasses. Her fingertips traced the foreign lines of his collarbone. She couldn?t bring herself to break their sensual embrace.

They?d never been close enough for her to notice his scent?like ink and citrus. The odd mixture suited him. His nostrils flared as she continued tracing him with her thumbs. But he hadn?t drawn away. Flat against him, Noah wasn?t tense, only watchful with his strong, unbreakable grip above her hips. How much longer would they stray into this land of intimacy? One of them had to have the willpower to pull away, before this went way too far. Chloe hadn?t been dragged to the beach house to have rebound sex with a stranger for three days. An hour ago she wanted nothing to do with men, but she couldn?t bring herself to pull away when she was chomping at the bit for any kind of touch.

Yet, Chloe couldn?t check her urge to go on tiptoe, inviting his kiss with a firm squeeze to his shoulders. That?s when he broke away like he?d been burned. Noah must have cleared three feet away from her and she was left with a stone weighing down her stomach. Okay, so that went badly. Think.

Chloe bit back a noise of hurt. Yeah, that?s the last thing he needed?a mental case chick who couldn?t check her own impulses while she was in rehab for being a relationship ditz. Although, he?d started all the flirty-flirty.

?So, don?t I need some kind of safety gear or something??

Voice only a little bit like Minnie Mouse?she could work with that.

Noah nodded and spun marching out the door.

She?d made no comment. Not a single joke, laugh, or snide remark. He moved blindly through the house feeling as if his head was going to float off his body. His body still bristled from his expectations?the inevitable end result of his stutter and he ran a hand through his hair. A low breath later he rested against the banister on the top floor living room.

?Why the hell did you move out of the way, you dingbat?? He said under his breath while his fingers tightened on the banister behind him.

When she?d moved in, all but inviting him to kiss her, he?d wimped out. Practically hightailed it out of there as if even touching Chloe would give him frostbite or something. He squeezed the banister trying to shake his trembling, but there was no other way to react to her hinting when he was still coming to grips with her reaction to his deformity. It wasn?t that he didn?t want her, come on, that was obvious. He just had to look the gift horse in the mouth first.

Noah groaned and cracked his neck. What the hell was wrong with him?

Which was worse acknowledging his stutter and getting it out in the open or glazing over it altogether, as if it wasn?t a glaring black mark? His face heated and he paced the cheap carpet uncaring if he wore holes in it. Did he want to kiss Chloe? Stupid question. Next. Hell, if he had kissed her well enough he was pretty sure he could erase all memory of his screwup and give him enough time to play with that he?d make a better impression. Until he did it again. She just made him so?so?nervous. Even admitting that made his gut twist until he licked his lips and took a restless seat on the couch.

It was his fault that it had been an embarrassingly long time since?yeah?since that had happened. Even admitting it in his own head was pathetic. There was no way to salvage the moment. No way to storm back in there, clasp her to him, and plant one on her until she was trembling and breathless. Noah didn?t have it in him. He closed his eyes and took a deep breath. God, it wasn?t for lack of trying?the image was seared into the back of his brain. He could almost feel her soft lips pressing against his own in surprise before she gave in and took his mouth completely and with no mercy.

But then he lost himself too. Until she plunged her tongue into his mouth and he gave himself up to her petite body as he wrapped around her body like a vine to a tree. The vivid imagery nearly knocked him flat out. One second they were locked in an embrace that made her thick and hard thinking about it, and the next she was shoving him down on his knees with one pale, petite hand. Her face was unreadable, a twinkle in her eye that made his mouth dry up as he tried to keep his breathing steady, but breathing in her light floral scent with every second.

There was something about Chloe. Something. He yanked his hand out of his pants and glanced down the stairs, as if she?d come up them any second and see him. The idea of going back down there made him bristle. Would she see everything he?d laid out in his skull despite the fact that he was locking it down? Noah bit his lip and grumbled an inarticulate stream of frustrated nonsense. Sure, it had been awhile in the bedroom department?but, Christ, that imagery kicking up in his head! He could still sense her fingers running through his hair, prickling his scalp?before she yanked his gaze upward to rest on her simpering smile.

Noah shivered, every muscle in his body tight with confusion.

What the hell did he get himself into?