CLAIMING MORE is now available at Amazon. I’m doing KDP Select again just like I did with Craving More. After the 90 day period it will be going up at other online etailers. 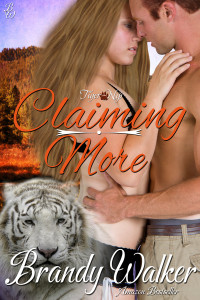 Blurb:
Sampson Hart has known Mary Jane Poppy for ten years. She?s his sister?s best friend and business partner. When the mating pull hits, every fiber in his body tells him MJ is his mate. And now that she should be feeling the pull too, he?s ready to claim her as his own. It should be simple. She?s had a crush on him for years.

MJ has loved Sam since she was fifteen. But being a hybrid she doesn?t think she?ll have a mate just like her parents told her. When Sam finally does notice her and proclaims she?s he mate, she doesn?t believe him; the mating pull isn?t there.

Running back home to Garden, MJ agrees to the arranged marriage her parents set up. It will relieve them of their personal debt by becoming the companion to a man who has lost his mate and has three young children raise. Most important to MJ though, is setting Sam free to the one he is really meant to be with.

Will Sam be Claiming More or will another steal the one he desires the most?

Excerpt:
Sampson Hart was in deep shit. He glanced over at MJ standing across the makeshift aisle from him. Damn she looked gorgeous. Her blond hair was in a fancy, twisty up-do, making her pale white skin brighter and crystal blue eyes clearer. She even put a matching blue gem in her nose piercing. The small stud glimmering when a shaft of light hit it.

The red silk of her sleeveless, short formal dress molded to her breasts and waist before flaring out at her luscious hips. If that weren?t enough to give him a raging hard-on, those killer red fuck-me heels would do the trick. What he wouldn?t give to stride over to her and claim her like his Tiger demanded. Let every person at the wedding know she was spoken for.

But he couldn?t, no matter how much of a fuss the beast within made. And wasn?t that the biggest hit to his oversexed ?I-can-get-any-woman? mentality. MJ, or Mary Jane as he liked to call her at times, mostly when he was talking to or about her when she was near, was his sister?s dearest and best friend. Right now, at this moment in time, they were standing steps from each other in front of a small crowd waiting for his sister Corrine to walk down the aisle. He was fairly certain his twin would skin him alive if he ruined the happiest day of her life by pouncing on the woman he so desperately wanted.

Melissa Schroeder – Only For Him Part 1

Pimpin’: Falling for a Santini by Melissa Schroeder