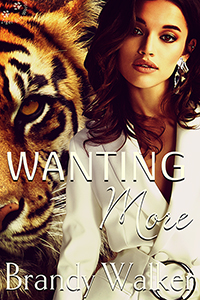 It’s time for the Jamie and Bodie’s story.

Jessie Montgomery-Murphy is ready for more. Fun, that is, something along the lines of hot and intimate. The man she?s had a crush on for years and currently her up with a hot look is the perfect candidate. She wants a no-string-attached, no plans for the future, good time, something Bodie fits to a T. She wants to take what she wants, when she wants, and not have to worry he?ll want more. If the mating pull kicks in earlier than expected and tugs her right to Bodie, then she?ll deal with that inconvenience later.

Bodie Donalson is the guy you call when you?re in a pinch. He gives his time to his friends when they need it and sometimes when they don?t. His always be there attitude has resulted in a bit of nomadic life. It isn?t easy to put down roots when you?re waiting for your mate. After an encounter with his friend?s sister, he?s got a good idea who his mate is. But she?s young and driven and not nearly ready for the kind of commitment he wants. He?ll take what she gives him, no matter how much he wants more.

Mystic Zodiac – The Collection I