My super good friend Lissa Matthews just had a new release in her Bar Next Door series. If you’re unfamiliar with it, just think hot, gay cowboys!

THE BAR NEXT DOOR:
C?mon on in! The beer?s cold, the atmosphere lively, the men plentiful. Scoot your boot heels through the door and settle on a stool. Our bartenders, Malachi and Eli, aim to please and our chef, Abe aims to satisfy. We?ll help you slake your thirst and we?ll make damn sure you have a good time? 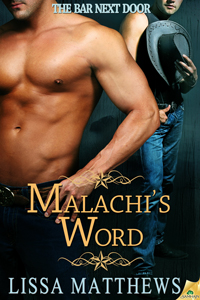 Could he love me??Malachi has wanted to know the answer since his best friend, Daniel, confessed to being gay. He has never forgotten that long-ago conversation, or the secret hope that another confession would follow: that Daniel is in love with him.

Daniel is?and always has been?in love with Malachi. But how is he supposed to share that information without risking the only friendship that has ever mattered to him? He couldn?t handle it if he were kicked out of Malachi’s life. The best Daniel could do was move home to Texas, buy a little rundown ranch to work outside Austin, and visit the watering hole where Malachi tends bar.

Malachi knows that something heavy is riding his friend and he?s tired of watching Daniel?s downward spiral of too much beer and too many meaningless flings. Enough is enough.

Except, when he gets Daniel home and some strong coffee down his gullet, the truth comes pouring out. A truth that nearly knocks Malachi out of his boots.

Courage like that doesn?t come easy?and Malachi can only pray his answer is enough to turn lifelong friends into forever lovers.

Warning: This little tale tries to contain a gay bar, a lot of beer, a hot cowboy with a pitchfork, another one with a serious addiction to boots and coffee, and a secret yearning between the two for hot blooded, can?t wait to get naked, just leave your boots on sex. Oh, and there are doughnuts…
Available in ebook:
All Romance eBooks?|?Amazon?|?Barnes and Noble?|?iBooks?|?Kobo?|?Samhain Publishing?|?Sony

Time and distance have a way of sneaking up on feelings thought long buried.

Five years ago, Eli held the hand of his dying lover and made a promise he never intended to keep. Find someone new to love? Be happy? Fat chance. Eli?s happiness died that day. He?s doing well to put one foot in front of the other, much less risk his heart again.

The only thorn in his side is Asa, part-time waiter at The Bar Next Door, who can?t seem to take a hint.

After years of carrying more responsibility on his broad, cowboy shoulders than most people twice his age, Asa knows what he wants when he sees it. Eli. Shadows haunt the gorgeous older bartender, who also happens to be one of Asa?s bosses, but Asa doesn?t care about potential complications. He only wants to banish Eli?s ghosts?and bring Eli back to life.

Persistence, a little impatience, and Asa?s very wicked mouth go to work on Eli?s grumpy, prickly defenses. But Asa may have to block the door to love with his foot?or his heart?before Eli slams it in his face.