Chloe & Eros, the bonus story in the Mystic Zodiac series, is here!!! It was a long time coming after I finished up the series. A REALLY long time coming. In fact, I wasn’t sure how the story would even come about when I started the series. Was I going to sum it all up at the end of book 12? Were they going to get their own story? If I did that, how long was it going to be? So many questions., absolutely no answers. At least none until I finally sat down to concentrate on what I wanted to do.

What I ended up with was compiling all of the prologues and epilogues into one document and then writing about Chloe & Eros and how they wanted to resolve the bet.

You can grab Chloe & Eros’s book for $2.99 and if you haven’t gotten the entire Mystic Zodiac Series yet you should definitely grab it now. My original plan was to raise the price of each box set from $2.99 to $9.99 (the regular price) as each box set released but something came up and I’m keeping them all at $2.99 until August 29th! 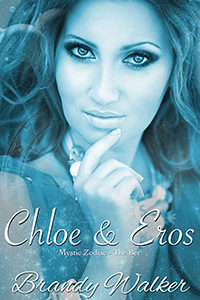 Eros paced his sitting room. The carpet was worn down into an easily seen path. Unease he could no longer suppress filled his chest with each step. He had the faint feeling there would be no end to it anytime soon. Not until one decidedly delicious Fate blessed him with her presence.

It had been a couple weeks since Chloe had won the bet between them, and he’d yet to hear a word from the blasted woman. He, of course, assumed she would be the one to get hold of him to cash in on the terms of the bet the day after it had become official that she’d won. Yet there was nary a word from her since that night in the hospital.

The landscape in which they lived and was represented, was as lively and beautiful as ever. The lush field of grass appeared alive with a rustling of a breeze. The man who lay entwined with the breathtaking woman had a glow of pure happiness about him. But no longer was his golden head tossed back in ecstasy. The woman was no longer arched beneath him, but her hands were now resting on his chest. They appeared sated and drunk on the endorphins that came from long bouts of euphoric sex.

He had to spin away, the sight pulling at something in his chest. There was an ache at the thought of not knowing how intimacy would feel with Chloe. He’d craved it for months on end; but, stubbornly, he would not be the one to cave. Gods and the like came to him, not the other way around.

Celeste Has Her Say…