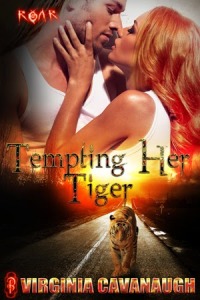 Attracting attention from the male species is a hard job, even more so when that male is shifter. So Stacia Carter has her work cut out for her. Problem is she?s been so sheltered all her life that she now has to learn to overcome her shyness as well. Add in the complication that the object of her desire is her big brother?s best friend and she has a lot stacked against her.

Jordan Bayne has mixed emotions when he runs into Stacia on campus. It?s nice to see someone from his pride, especially someone so close to his best friend Seth. But Stacia has always been petite and her family has always sheltered her. So when Seth asks Jordan to take care of his sister, Jordan finds it hard to be around her without noticing the woman she?s turned in to.

When a male from a rival pride sets his ambitions toward Stacia, it?s hard not to see red. Jordan tells himself he is only doing right by Seth?s sister to keep her away from the male, but the lust under the surface gets harder to resist. To his surprise Stacia doesn?t even want the other male, she wants him. When she turns on the charm it becomes increasingly harder to resist the pull he feels for her.

But there are things she doesn?t know about him?things that could change the way she looks at him. And for that reason he will keep his distance. After he has just one more kiss.

Running with the Wolf – Romancing the Wolf

A Monday Memory: Lion for Her