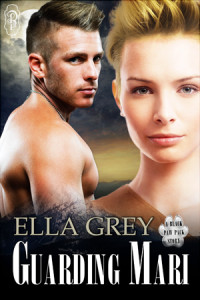 A killer is on the hunt for Mari, the doctor to the Black Paw Pack. It will take the combined efforts of Mari and her mate, a man she hasn?t seen in three years to keep her safe.

Blurb
Three years is a long time to be away from your mate.

Mari has been living half a life.

A doctor before she was infected with the werewolf virus, Mari is now the target of a deranged serial killer. The night held one bright moment, she met Daniel Greyborn, the other half of her soul.

Daniel wants a life time with his mate.

He made a difficult decision when he left Mari with the Black Paw Pack. When he finds a body on his compound he knows that Ryback is back and it?s time to finish what happened three years ago.

But are they about to underestimate a killer?

Mari smiled at him. ?Hello Daniel.? She sat up and pulled off her shirt and bra. He darted forward catching her nipple between his teeth. Her fingers were in his hair as her back arched pushing it into his mouth before Daniel was pushed away. The change between human and wolf was seamless. Her fur was a dusky gold and the most beautiful thing he’d ever seen. Mari jumped off the table. She glanced over her shoulder. Her eyes were full of mischief. Daniel stripped out of the rest of his clothes. Her challenge was clear.

Catch me if you can, Greyborn.

Adam Reece, Alpha of The Black Paw Pack, follows all the rules but he can?t resist teasing Katherine Moon. Pack law frowns on wolves and witches mating so the resident Earth Witch has become his friend and confidant, nothing more.

Life is good. Kat?s blessed by the Goddess who connects her to the earth and the wolf pack she watches over, even the Alpha who only seems happy when he?s pestering her. But she wants more?namely the forbidden attention of a certain steadfast Alpha with a boyish grin. Too bad crossing that line isn?t an option.

When a tragic accident threatens to steal her from him forever, Adam must make the hard decision?save Kat or lose her forever, even if she never forgives him.