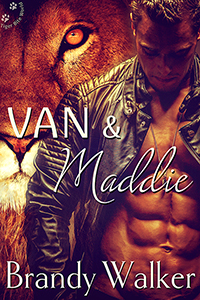 Madison Templeton, known to most as Maddie, is going through a break-up. The

man she thought was her mate, actually wasn’t. While that should break her heart, and it did a little, she’s more upset about losing her best friend and confidant, her ex-boyfriend’s twin brother Van. When the opportunity to escape town and help her cousin out at her bakery comes around, she jumps at it. A little time away to get her head back on straight seems like the perfect way to get some distance.

Van Bowman thought all he could have since the day Maddie unwittingly picked his twin brother over him, was friendship.  He’s had to love her quietly from a distance, and find comfort in being her confidant. Now that his brother has broken up with her, Van is ready to claim the woman that should have been his from the beginning. He made a mistake not telling her how he felt, and he aims to fix that. He’ll do anything to convince her she belongs to him, even chase after her and face off against her new protective friends.

Madison Templeton cut the engine to her sleek, dark blue VW Beetle, as the last note of the song she was belting out finished. She climbed out of the compact vehicle, stretching her legs and back in an attempt to relieve the tightness that had crept into her muscles during her long ass drive. She sure as hell wasn’t used to being cooped up in a car all day, and she hoped like hell that this trip would be worth it. Time and distance were what the doctor, well her mother, ordered in situations like this. But damn, it seemed to be taking forever. With only thirty miles left before she got to her destination of Cascade, Colorado, she was beyond ready to be there.

“One final push. That’s all I need,” she murmured to herself.

From the pictures she had seen, it was a stunningly beautiful place; much like her own hometown of Sugar Mountain, North Carolina and a lot like her current stop in Winter Park. There was something just a bit different though between her home and where she was. There was a beauty and freshness that clung to the air she had never felt before, and she didn’t doubt it would be the same in Cascade. Quite possibly even better. If she attempted to put a name to what she was feeling, she would almost say it felt like hope.

It was a stroke of luck that one of her distant cousins needed help at the bakery she co-owned with her best friend. Sweet Confections would offer her some sweet relief, at least that was the hope. And that was all Maddie needed: hope.

It wasn’t like she didn’t have the free time to lend that much-needed hand. Come to find out, mothers contacting mothers, no matter how distant the relation, wasn’t always a bad thing when there was news to share. The same could be said about a thriving business, a pregnant and ready to pop employee, and a break-up that she would like to say was unexpected but deep in her heart knew it was inevitable. The only fault she could find at the moment was that it had taken her three days to get out to Colorado from North Carolina. And while a long, arduous trip by herself wasn’t high on her bucket-list at this point in her life, she would survive. Flying, while so much quicker, had been completely out of the question when her mom brought up heading out West. There was no way she would be crammed in a tin can with a bunch of people she didn’t know. Too many people, too many foreign smells, too many chances for her to have a run-in with someone not hip to the shifter life.

A car pulled up behind her, rattling her from her wayward thoughts and back on the task at hand. “Thirty more miles,” she whispered under her breath while sliding her credit card in to pay for gas. Filling up, she leaned against the side of her car to wait. It was way too easy to get lost in her thoughts again, which dipped right back into the reason for her trip. As if having three days to go over everything again and again hadn’t been enough already.

She had to admit that the beauty of Colorado took a small bit of the sting out of why she had free time on her hands, but it didn’t erase it completely. It had come as a shock to her, at first, when her boyfriend of two years decided they should see other people. The first thing rolling through her mind was how could she be so wrong? She thought they were meant for each other. The mating pull was there, well, at least marginally. She figured because of her hybrid DNA it would grow over time, develop into a relationship similar to what she saw between her parents. But, apparently, and quite obviously, with only a couple days between then and now, they weren’t destined to be together; and he’d wasted no time finding someone else to warm his bed after dropping that bit of news on her.

Thinking about it now and throughout the few hundred miles of road, she wouldn’t say she was heartbroken. Once she saw his abrupt change in bed partners, she’d wasted no time in looking for a way to hightail it out of Sugar Mountain. The town was just too small not to run into Mack and Sheila at every turn. She wasn’t ready for that. She needed a little time to grieve the ending of their relationship, at least for a bit, before moving on with her life. The jerk could catch crabs though, and his dick could fall off for all she cared at the moment. It was a pretty good possibility too since he was already sleeping with that skank.

“Wow, that came out of nowhere. Maybe I am a little bitter about what went down.”

Things hadn’t been going well with them for the last six months of their relationship; and, even if she wasn’t devastated, he’d definitely bruised her ego. Being dumped sucked, no matter the reason; and his hey babe, it’s just not working anymore, hadn’t made it any easier. Not only did she lose the guy she thought might be her mate, but she’d lost another man that meant the world to her at the same time.

Mack’s twin brother, Van, was her closest friend, one might say her best friend even, and her confidant about, fuck, everything! Or had been. The three of them spent a lot of time together hanging out, even after she got together with Mack when they graduated school. Now that she wasn’t with him anymore, she didn’t get to see Van. He’d had to pick his brother’s side in the no longer dating divorce. It was the worst.

The guy in the car behind her honked his horn, tearing her away from her depressing thoughts. She pushed an unruly curly brown lock from her face and looked over at the pump. It had stopped, and she hadn’t even noticed. Thankfully, it didn’t take much to top off the tank. Her bank account dwindled by the second, and she needed every penny available to keep her afloat until she started earning paychecks from her cousin. She didn’t exactly have plans for the money but being flat broke wasn’t in her plans either. She just needed to work and forget about everything she’d lost. Maybe her time in Cascade would bring about a new life for her. A new purpose even.

The man behind her honked yet again, and this early in the morning, it took everything she had in her not to stomp over and break every last bone in his hand. Her mother said it was an anger management issue, but Maddie liked to think of it as idiot management. If she could save one fool from irritating someone else, then she considered it mission accomplished.

Hopping back in her car, she took off before the jerk got any jerkier and she lost control of her more animalistic side. A run and catnap were needed in the worst possible way after being cooped up in her car for over three hours. If she could have done the trip in liger form, she would have done it in a heartbeat. There was nothing she loved more than running around in her fur and causing trouble.

“Sadly, not an option,” she grumbled. The last thirty miles couldn’t go by quick enough.