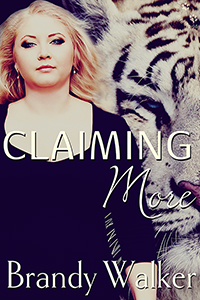 best friend, business partner, and has had a crush on Sam for years. When the mating pull hits him, he’s ready to claim her as his own. Given their history, it should be simple. Right?

MJ has loved Sam since she was fifteen. But being a hybrid, she’s been told all her life she won’t have a mate. When Sam proclaims she belongs to him, she doesn’t believe it; the mating pull isn’t there, and Sam isn’t meant to be hers.

Running back home to escape the love she feels for Sam, MJ agrees to become the companion of a man who lost his mate and has three young children to raise. It is the only way to set Sam free to find the one he is truly meant to be with.

Will Sam be Claiming More or will the one he desires the most find comfort in the arms of another?

Sampson Hart was in deep shit. He glanced over at MJ standing across the makeshift aisle from him. Damn she looked gorgeous. Her blond hair was in a fancy, twisty up-do, making her pale white skin brighter and crystal blue eyes clearer. She even put a matching blue gem in her nose piercing. The small stud glimmering when a shaft of light hit it.

The red silk of her sleeveless, short formal dress molded to her breasts and waist before flaring out at her luscious hips. If that weren’t enough to give him a raging hard-on, those killer red fuck-me heels would do the trick. What he wouldn’t give to stride over to her and claim her like his Tiger demanded. Let every person at the wedding know she was spoken for.

But he couldn’t, no matter how much of a fuss the beast within made. And wasn’t that the biggest hit to his oversexed ‘I-can-get-any-woman’ mentality. MJ, or Mary Jane as he liked to call her at times, mostly when he was talking to or about her when she was near, was his sister’s dearest and best friend. Right now, at this moment in time, they were standing steps from each other in front of a small crowd waiting for his sister Corrine to walk down the aisle. He was fairly certain his twin would skin him alive if he ruined the happiest day of her life by pouncing on the woman he so desperately wanted.

A noise from his right caught his attention. Speaking of best friends, Sam’s was standing next to him fidgeting, waves of nervous anxiety rolling off him. Jett yanked at his collar for the millionth time and hissed. “Why hasn’t she come down the aisle yet?” The poor guy was freaking out more than a cat on a catnip overdose.

“Relax man. She should be walking down any minute. You found your mate and you’re getting to marry her without me ripping your balls off being that she’s my sister. Be thankful and have some patience.”

A part of him, that he liked to ignore as much as possible, was pretty fucking jealous of Jett. His best friend found his mate and after screwing up and making up a couple of times, not to mention being stalked by and dealing with a wacked out nut-job, Jett was getting what most shifters hoped to have. A mate who loved him and would put up with his dumb-ass for the rest of his life.

Sam looked back over at MJ.

The word repeated over and over in his head like a drum. Yeah, he was positive she was his mate. When the first phase of Dewasa hit him, his instincts told him he had to be near her, which was the main reason he had moved to Cascade, Colorado. To be close to and, hopefully, get to spend more time with MJ.