Shifter U series has been re-released!Available Now
Home / Bookshelf / Shifter U / Changing Her Tune 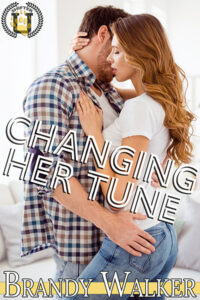 Tess Flanagan is determined to make it through her final year of college, even if it kills her. With a horribly humiliating break-up to start off the school year and a shocking upheaval to everything she thought was true, it isn’t a wonder that anger is her go-to feeling. But after months of stewing, she’s finally shaking it off and seeing the light of day. That is until a run-in with the star receiver of the football team mistakenly thinks her roommate is his mate when, in reality, it’s her.

Austin Shaw is the big man on campus. Star receiver of the football team with a promising career to go Pro. He has women throwing themselves at him left and right. Great friends. Great family. It’s an incredible life. A midnight trip to the laundry mat as punishment for losing a bet throws his perfect game off. He scents his mate, and when two women walk in, he and his buddy call dibs on the same girl. It isn’t until he gets up close and personal that he realizes he made a mistake and the woman who should be his by fate declares she’s going rogue.

More than meets the eye…

Tess is nothing like any woman he’s encountered, and something is boiling just beneath the surface. Austin finds out quickly it’ll take more than a sexy grin and big personality to get Tess to give him the time of day. But when he does, will he have what it takes to change her tune, or is he going to fall flat?

WARNING: The audio edition was created using the original Decadent Publishing version. This audio edition will not reflect the changes made when rights reverted to the author.