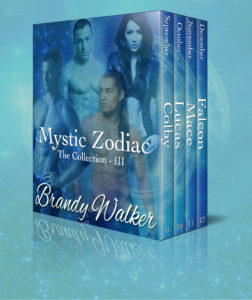 Colby Noble is a Djinn. No, not the living in a lamp, granting three wishes kind. There?s more to a Djinn than that and there?s more to him than being a genie. He?s the head bartender and co-manager of the bar at Club Satyr. He’s also happily single. All of that changes when he spies a sexy, curvy witch breathing fire?literally. Witches are his weakness. The kind of women he can?t resist. Trust him, he?s tried. It didn’t work out well.

Ella Burke is celebrating a friend?s promotion with a night out. Satyr is the place for all things Mystics, including getting drunk and wild. When she and her friends are approached by reputed heartbreaker and so-freaking-hot-she-could-die bartender Colby, she?s intrigued and giddy?but that could have been the alcohol.

Forces outside their control push them together after she accidentally loses his number. Strange and mysterious things that have Ella getting her dream job and Colby getting a chance with his dream woman. That is, if another jealous witch doesn’t get in the way.
~
LUCAS: OCTOBER
Book 10

Lucas Strigoi has lived a long, long life; over five-hundred years actually. He?s loved and lost. Gained money and experience. Found places he?s called home and, at times, watched them burn. Basically, he?s lived many lives and has many more to go. He?s at the age when settling down should be his primary focus, but he?d thought he?d already found the One sixteen years ago. He was wrong.

Reagan Aliat is an Ally. The literal translation of her last name. Her family has been connected to the Strigoi Vampire family for too many centuries to count. At one point, her older sister was romantically involved with one of them and everyone, including Lucas, thought they were destined to be. Her sister had other plans, though, and broke his heart after six years together. Lucas disappeared from their lives and took with him Reagan?s undying love.

Seeing each other again after ten years, Reagan and Lucas must travel across the United States to get back to her family. Reagan knows she needs to fight the love and attraction she?d always felt for the vampire, resolute in the belief that Lucas will never be hers. Lucas, on the other hand, is realizing his mistake so many years ago was worse than he?d thought, and the woman he should have been with is his ex?s little sister.
~
MACE: NOVEMBER
Book 11

Park Ranger Mace Seneca and Astronomer Piper Whitney have a past. One that bears repeating, if the Gods have their way?but, with a few slight changes. They broke up over something utterly ridiculous and definitely avoidable. With a little astronomical fiddling, Mace and Piper are thrust back into each other?s lives. Forced to work together in order to recover a meteorite that just happened to land in the State Park where Mace worked. Each of them dread and anticipate the encounter.

Working separately during the day and then spending their nights in close quarters, each of them wonder if they could be a couple again. Before that can happen, however, they need to examine how they fell apart so easily, and if they can truly have a second chance at love.
~
FALCON: DECEMBER
Book 12

After months of waiting, it?s time for Falcon to claim her prize. The one Hades and Persephone promised for years of loyal and undying servitude. All she needs to do is find the human and take him home to the Underworld.

Deval Hope is still fighting. Fighting the addiction his sister saved him from. Fighting to keep the darkness that fills his soul, at bay. The only thing that helps are nightly dreams of a dark-haired vixen. She makes him feel whole and at peace, something he never thought he?d feel again. He knows there is something missing in his life, but doesn?t know what it could be. The arrival of a petite badass that tickles something in the back of his brain has him wondering if she?s the missing piece.