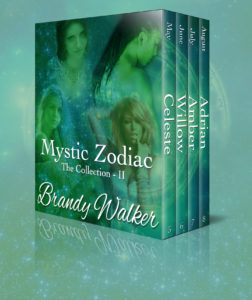 Celeste Kincaid is on a mission: Find the injured deer in the woods and heal it. Once that’s done, she can get back to her real job and to dipping her toe in the dating scene. But from the onset of the task, she gets the feeling something isn?t right.

Owen Foster is in love, well, at least lust at first sight. The blonde-haired goddess standing in his backyard is every man?s fantasy come true; until she opens her mouth and accuses him of being a crappy elf. He can overlook that misguided belief, but when her youngest sister shows up and acts like they?re together, he?ll have to go to desperate lengths to prove they aren?t.

A meddling mother dabbling with faerie magic, the worst storm they?ve ever seen, along with a bear and a fawn?will these two be able to turn their instant attraction into a love of a lifetime?
~
WILLOW: JUNE
Book 6

Cedric Stone is ready to claim Willow as the love of his life, except she still considers him the enemy. It?s his good fortune when he shows up on her doorstep and sees her wearing an enchanted moonstone, a gem known to be worn by those looking for love. It?s the perfect way into her life.

The more time they spend together, the more Willow wonders how much of Cedric?s attention is because he truly is in love with her or because she?s wearing an enchanted moonstone.
~
AMBER: JULY
Book 7

Amber Thompson is a Siren. A love-em and leave-em, let?s have some fun for a little while kind of woman who isn?t looking for a long romance, let alone a happily ever after. It just isn?t part of a Siren?s DNA. She loves her single life and loves working at the Mystics Only bar, Ecstasis D. Taking home a sexy as sin wolf for a night of fun shouldn?t change that.

Andreas Stathos is a bored, business suit wearing, drowning in paperwork, wolf-shifter. His company is doing great and its everything he hoped for, except the spark is missing and work has turned into obligation. It doesn?t help matters that he can?t remember the last time he had a date or took the time to go wolf. A trip out of town for fresh air should help.

As soon as he steps into the bar, Amber and Andreas both know their lives will be changed. But how much depends on one stubborn Siren and one wolf?s ability to convince her they have a future together.
~
ADRIAN: AUGUST
Book 8

Adrian Trent spends his days and nights working as a tattoo artist at Cherry Ink. It?s a good life. He meets interesting people and expresses himself with his unique brand of art. But on the odd occasion, he gets the opportunity to do the one thing he truly loves: acquiring shiny, dragon-worthy gems. Sometimes it?s just for him, most of the time, it?s for a client willing to pay him, very well, for his time and skills.

Li-Mei Chen loves books. The rarer the better. She gets her fix every day working at a local college library in the special collection section: her concentration, Asian texts. But not all of the books she chases down are for the University; some of them end up in her personal collection. Her Chinese Dragon won?t have it any other way.

When a new client approaches Adrian and Li-Mei receives a mysterious email, they?re both put on the trail of what their dragons treasure most. Or, so it seems. What appears to be a chance encounter, has to ability to turn into something more. Will they take a step toward happily ever after, or will things spiral out their of control?