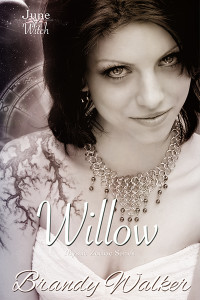 QUOTE: If only casting a spell on a man was as simple as it sounded. Not to fall in love…but to send him hurling off the edge of the earth. ~ Willow

She’s a witch looking for the love of her life…

He’s the witch she’s always seen as her nemesis…

Cedric Stone is ready to claim Willow as the love of his life, except she still considers him the enemy. They’ve known each other all of their lives and after a blind date gone horribly wrong, thanks to him, he realizes he’s in love with her. It’s his good fortune when he shows up on her doorstep and sees her wearing an enchanted moonstone, a gem known to be worn by those looking for love. It’s the perfect way into her life.

What happens when he becomes the one she can’t live without?

As the days go by and they spend more and more time together, Willow begins to wonder how much of Cedric’s attention is because he truly is in love with her or because she’s wearing an enchanted moonstone.