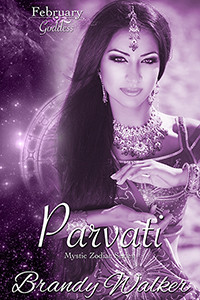 QUOTE: I’m a successful, beautiful woman providing love to the world. The should be enough…shouldn’t it? ~ Parvati

Parvati Shiva, a true descendent of the Goddess of love and devotion, is fed up. She runs a successful dating site, connecting Mystics and humans all over the world with their one true love. The only she hasn’t been able to find love for is her.

When a hacker gets into her network and website, shutting down her site in the height of the busy season, she calls on her cousin Jag for help, who in turn reaches out to an old friend.

Colin Patterson, IT guru and confirmed bachelor, quickly agrees to help his friend’s sister out with her computer problem, hoping it will be a long drawn out process. He’s eager to escape his mother’s matchmaking Valentine’s Day party. She’s invited all of the single women and a few men to jump-start his dating life, something he has no interest in at all.

One mistaken identity later, Colin ruins his chance with the beautiful Indian woman he’s instantly attracted to. Will he be able to prove he isn’t a boss bashing idiot, save Parvati’s company, and win her affections before he doesn’t have a reason to stick around?

Warning: This book contains a geeky hero who can’t keep his mouth shut, a strong willed businesswoman dealing in love, and an attraction that neither can deny.

Please note: This book has a hot M/M scene. It does not involve the hero of this story.