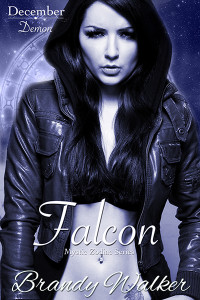 QUOTE: Of course they save the best for last. Once you get to know me, you won’t need anyone else. ~Falcon

After months of waiting, it’s time for Falcon to claim her prize. The one Hades and Persephone promised for her years of loyal and undying servitude. All she needs to do is find the human and take him home to the Underworld. Then she will finally have someone to share her days. Someone to fill her lonely nights. Someone to claim as her own. If they happen to fall in love, then she’ll be happy with that. But it certainly isn’t necessary.

Deval Hope is still fighting. Fighting the addiction his sister saved him from so many months ago. Fighting to keep the darkness that fills his soul, at bay. His days bleed into each other, as he struggles to keep his sanity. At night, he escapes his reality with dreams of a dark-haired vixen he calls his own. She makes him feel whole and at peace, something he never thought he’d feel again. He knows there is something missing in his life, but doesn’t know what it could be. The arrival of a petite badass that tickles something in the back of his brain has him wondering if she’s the missing piece.