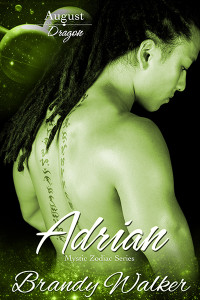 QUOTE: Its all fun and games until you piss off the dragon. ~ Adrian

She’s a college librarian who loves a good book…

Adrian Trent leaned against the wall of Cherry Ink and watched the midnighters stroll their way down M Street. A few patrons tumbled out of Birreria Paradiso, the pizzeria joint across from the shop. Their loud, bawdy laughter filling the air. Giving life to an otherwise quiet night. Two women walked toward him, stopping in front of the shop, they glanced at him quickly, then giggled before heading inside.

They had to be mid-college age, twenty-one or so, minimum. The betweeners, the ones fresh out of high school and barely into college, tended to stop in earlier in the day, still clinging to their curfews and parents’ rule of thumb. He remembered that age fondly. A simpler time when he didn’t have to worry about growing up, or the responsibilities that came along with it.

But, for a dragon shifter, that age didn’t actually last long. The urge to find a place in society and explore new areas pressed too heavily on the dragon within. It wanted to leave the nest, spread its wings, figuratively and literally speaking.

DJ, one of the tattoo artists he worked with on a regular basis, stuck his head out the door. “Coming in? The ladies are requesting, and I quote, ‘the hottie with the dreads out front.’ I could only assume they were talking about you.”

Adrian smirked. It wasn’t the first time he’d been referred to like that. “What? And you don’t think I am?”

DJ flipped him off. Adrian chuckled before chugging the caffeine-infused energy drink he’d been nursing while waiting for the night to pick up. He could already guess what they wanted: cute hearts, or flowers to decorate the inside of their wrists, which equated to a first tattoo bonding moment for the girls. He didn’t begrudge the simple requests and meaningless ink, but he loved creating elaborate designs and works of art. Things people stopped and stared at. Asked questions about, and generally became the busy bodies most people already were.

Oh well. They wouldn’t necessarily be the most demanding tattoos, but it would at least fill the otherwise lackluster evening.

A client of his had cancelled an appointment earlier that would have taken a couple hours to finish. It was his only reason for coming in on what should have been his day off. He thought of heading back to his townhouse once he’d heard about the cancellation, but with nothing else planned for the evening, he decided to hang out at the shop. He could have worked on the drawing for a back piece he was scheduled to start the following week, but he couldn’t find the patience for it. Small delicate lines were not something he wanted to fuck around with when his head wasn’t in the game.

A foreign feeling rumbled in his chest, distracting him from work, since he’d gotten up that morning. All day the dragon paced back and forth, huffing out his anxiety. The hair on the back of his neck stood on end. Almost like an early warning sign that there was change on the wind. He got the impression it was soft and subtle. Feminine, most likely, which he didn’t mind one bit. It had been a while since he’d had a woman in his life.

He’d learned early on to listen to the beast within. His senses more attuned to the mystical and supernatural. It had also kept him from getting into trouble or caught during some of his nighttime…activities.

Chucking the empty can in the trash nearby; Adrian pulled open the heavy door painted with a cherry blossom tree dropping petals, plastered his professional friendly grin on his face, and made his way to the women in the front of the shop.