Shifter U series has been re-released!Available Now
Home / Bookshelf / Keystone Predators / Under Her Spell 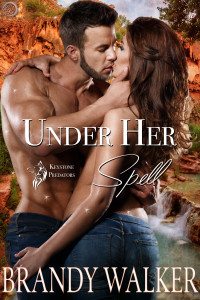 The Beta of the Keystone Predators, Diego Mendoza loves his new job and the responsibility that comes with it. Even the simple task of retrieving his Alpha’s cousin from the airport. He thinks it’s going to be a quick grab and go until he gets her in his truck.

Daphne Moore needs a break and a trip to Arizona for her cousin’s wedding seems like the perfect place. Part wolf shifter and part witch she’s had a hell of a time fitting in. Her father’s Pack wants her to renounce her mother’s coven, while her mother’s coven wants her to swear an oath of allegiance forsaking the Pack. All Daphne wants is a place where she’s accepted as both wolf and witch.

Diego wants his mate instantly and is ready to do whatever it takes to claim her. Daphne is a little wary of the situation. Her wolf is telling her to go for it while her witchy side balks, knowing Diego will try to suppress her more enchanted side.

Can Diego convince his witchy wolf he is completely under her spell, hexing side and all?

“Yes. Just family stuff.” She gave him a strained smile that didn’t reach her eyes. ?Are we going to go or sit here for a while longer??

Diego snorted, she certainly didn’t have a problem speaking up. He threw the truck in gear and forced his attention to the road in front of him. His body pulsed with a longing he was still trying to wrap his brain around. It would be best to focus on her immediate needs. Protect. Nourish. Mate. Love. He shook the foreign thoughts from his head. “Is there something, in particular, you’d like to eat?”

Out of the corner of his eye, he saw Daphne purse her lips and tap a pink-tipped finger against them. “Nope,” she said, scrunching up her nose. “I’m open to suggestions. The last thing I ate was a bagel this morning in North Carolina around six.”

Diego’s only response was to grunt. He didn’t like that she hadn’t eaten, but it wasn’t his place to say anything. Yet. As he made his way onto the highway, he debated the direction he wanted to go. If he went the faster route, there was only one place to grab food along the way. If he drove through town, she would have multiple places to choose from, but it’d take them longer than he wanted, especially if there was traffic.

There was only one real choice. He’d take more time with Daphne over a faster route any day. “Is fast food okay? Burgers or tacos? Maybe a sandwich of some sort?”

“Chicken sandwich and sweet tea? That sounds like heaven to me.”

“I can arrange that.” It didn’t take him long to find a place to grab what she wanted. They zipped through the drive-thru and were back on the road in no time. “So, you’re Gideon’s cousin?”

Diego glanced at Daphne as she wrapped her pink lips around the straw in her drink and took a long sip. A shudder worked its way down his spine at the sight. All he could envision now was what she would look like on her knees with his cock thrusting between her supple lips, his fingers threaded through her thick brown hair controlling the depth of each plunge. An inadvertent groan escaped his throat.

“You okay over there?”

Diego made a noncommittal noise and turned his attention back to the road. He had a feeling it would take all of his concentration to get them home safely. There was something about this woman that called to him on a primal level. Something his wolf was trying to tell him, but the human part was too drunk on the intoxicating scent to hear.

That drew his gaze again. There was no way they were related through their fathers. Daphne didn’t look anything like the Deckard side of the family. Tall, dark, and deadly. “Really? But your last name isn’t Deckard.”

“Well, you don’t have to be married to have a kid.”

“Oh.” Diego clamped his mouth shut. She was completely right.

“Shocking isn’t it,” she snickered. “My parents had a one-night fling, and I was the result. Dad wasn’t around when I was born, so Mom gave me her last name.”

“They didn’t want to get married?”

Daphne let out a full-bodied laugh then. The sexy sound making his wolf howl. “No. They aren’t exactly compatible.”

“They were compatible enough to have sex.”

Diego chanced a look at her again. She’d twisted in the seat slightly so she faced him. Her long brown hair was wavy and lush. It cascaded over her shoulders, falling over the tops of her large breasts, which he had to say were magnificent. The creamy, plump globes were pushed up, and the tops exposed by the black, scooped neck shirt she wore. He let his gaze wander lower, taking in her flared hips and tight jeans. Jesus, he bet her ass was full, and the perfect fit for his large hands.

He shook his head and turned back to the road. “Yeah, I think most people are.”