Shifter U series has been re-released!Available Now
Home / Bookshelf / Freefall / Caught in the Moment 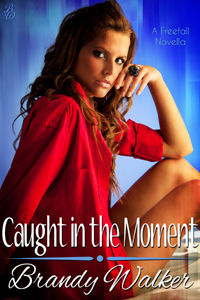 They say a picture is worth a thousand words…?

That’s what Laurel Kane aimed for when she was in high school, and it’s what she does now ten years down the line as a freelance photographer…capture images that spark memories and imagination. Lately though, she’s had a lot of memories cropping up and turning her imagination on. She’s placing the blame solely on her cousin for reigniting her long-extinguished crush on a man who broke her heart as a teenager.?

They say what goes around, comes around…?

Quinton Ferris has moved on from his high school days. Sure, he’s still an adrenaline junkie and all-around sports lover, but he’s managed to turn that passion into a thriving business. He never imagined he’d be pulled back to a time he’d like to forget and be reminded of how much of an egotistical jerk he’d been. He’s not that guy anymore. But that’s exactly what happens when Laurel spends a weekend at the Chute Shack on a photography assignment and he remembers exactly who she is.?

They say time heals all wounds…?

Quin can only hope that’s true, and he can finally apologize for how much he hurt Laurel when they were in high school. Because, as much as he wants to deny it, he’s falling for the woman behind the lens.?

What’s up next…FLY GUY NEXT DOOR