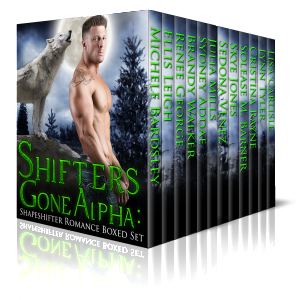 NO LONGER AVAILABLE
Released May 2015

When it comes to love, it doesn’t take long for shifters to go alpha. This boxed set of NEW stories from bestselling authors shows how there’s nothing a shifter won’t do for their mate’s pleasure.

Brandy Walker – Her Destiny
Selena has a new job, new home, and new friends; to include a cat she calls Felix. When her life is threatened Felix, aka Malcolm, comes to the rescue bringing her into a world she never knew existed.

Her Alpha Mate by Michele Bardsley
As the Fire Pack alpha’s wife Alice Mason will do anything ensure the future of her wolf pack and the ancient bloodline of her husband. Even if it means she must sacrifice her own life…

The Bear Witch Project by Renee George
Bears and witches are natural enemies, so when bear shifter Ty Wasape meets curvy witch Solange Tremaine at an Osage casino, he is naturally torn between killing her or making her his mate.

Darkness Rising by Lisa Carlisle
Antoine Chevalier is a gargoyle shifter living in Paris. When he’s attacked by rogue vampires, he’s forced to abandon his identity and must recreate himself in a world now filled with darkness.

The Gathering: Homecoming by Ellis Leigh
Join the trio from The Gathering as they navigate their new life. Blasius and Dante must make their mate Moira feel welcome, but their mountain girl has trouble finding her footing on marble floors.

Wolves at the Door by Skye Jones
Brooke is studying the wildlife of a remote Scottish area. What she finds shocks her. Sexy alpha, Drew, seduces Brooke. They spend the night together, but Drew wants more. He wants Brooke as his mate.

Domlen’s Way by Solease M Barner
Domlen’s handsome, sexy, smart and a Dominate. He will ensure you are satiated, satisfied, sore and pleased. You will only have to submit to Domlen’s Way to get the attention of this dragon-shifter.

Rescued By the Wolf by Cristina Rayne
When Rogue lion shifter, Tori, jumps into the truck of an annoyingly hot wolf shifter she mistakes for human, lifelong hostilities and self-restraint are tested as they flee from the lions in pursuit.

Spring Mates by Lynn Tyler
Mating season. The time when a young man’s heart turns to creating a permanent bond with the one he loves. At least, in theory. 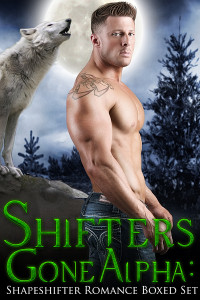