If you dream of shifters, this set of 20 brand new shifter stories featuring USA Today and New York Times best-selling authors has you covered. Whether you like them large and in charge or sleek and sexy, you’ll find the right story to spice up your night in these pages.

A roaming bear?gathers no strings, and that?s just how Tobias Langstreet likes it. A chance?meeting with beautiful, lonely Harriet Mills might just change his mind. Can he?trust her with his secrets and unwrap the web of lies around her? 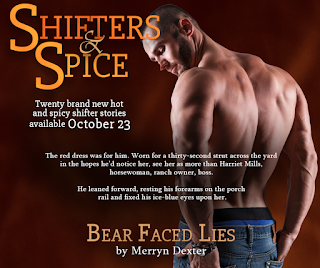 Tobias wrenched?the wheel, returning them to the smooth tarmac surface. Harriet forced herself?to look away, staring at her own reflection in the dark window beside her, the?view beyond swallowed by the still night.
?
The truck jolted?again, and she started around, shocked to see Tobias steering them onto the dusty?verge. His hands flexed on the steering wheel a couple of times before he?jabbed at the release mechanism of his seat belt. ?This is a really bad idea,??he muttered, eyes still fixed on the blank windshield before him.
?
?What is?? She?knew what he meant though. Even before he lunged across the cab to grab her in?a fierce embrace that stole her breath. She knew, she might even agree with?him, but it didn?t stop her opening her mouth to the demanding press of his?tongue.
?
He swept inside?her lips, sucking and feasting on her mouth, stealing her breath until she saw?stars. She didn?t push him back though. The banked arousal simmering in her?belly roared to life, and she threw her arms around his neck, pulling him?closer, needing to feel the heavy weight of his body against hers. He cursed,?fumbled at her side to release the belt constricting her, then lifted her up,?dragging her across his lap as though she weighed nothing.
?
Harriet squirmed,?tried to get closer to where she wanted to be, to get the thick length of him?notched into the ache between her legs, but the tight skirt of her dress?stopped her. ?I hate this damn dress,? she snarled against his lips, and he?laughed through their kiss. The pleasant rumble of his chest rubbed her nipples?through their clothing and she gasped.
?
?I?m a big fan of?your dress, sweetheart, but it does have some drawbacks.? Tobias grabbed the?bottom hem and rent the fabric in two, splitting the seam to her waist.
?
Free at last, she?scrambled into his lap, knocking her head on the roof of the truck in the?process. ?Damn!? The smile fell from his lips and he held her still. She could?read the concern in his eyes and was having none of it. ?I swear, Tobias. If?you tell me not here, not now, I?m going to scream.?
?

A strange light glowed in his eyes, a flash of?the eerie brightness she?d glimpsed earlier. It sent her heart pounding, part?fear, part arousal at the hunger burning there.?

Returning Release: Under Her Spell